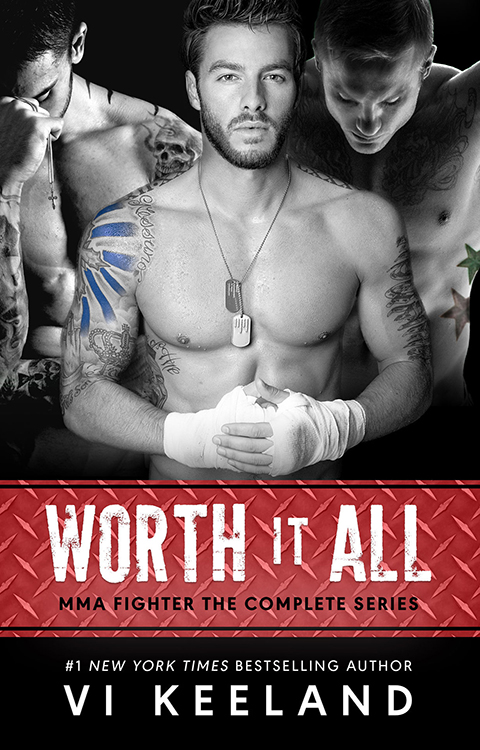 Three complete and swoon-worthy standalone novels featuring men who fight hard in the ring and harder for the women they want.

Worth the Fight
A STORY OF FATE
A tragedy in the ring leads Nico Hunter to lose his edge. Until he meets Elle—a beautiful attorney who he has nothing in common with. But the tattooed, hard-bodied MMA fighter and the good girl attorney find out they have a lot more in common than they bargained for.

Worth the Chance
A STORY OF SECOND CHANCES
Vince ‘The Invincible’ Stone is every woman’s fantasy…strong, sexy, confident, and completely in control. With the biggest fight of his life coming up, his focus should be on training. But when chance brings Liv back into his life to write his story, there’s no denying the chemistry is still there.

Worth Forgiving
A STORY OF FAITH
Daughter of legendary fighter “The Saint,” Lily St. Claire knows firsthand how fighters can be. As the owner of a chain of MMA gyms, she’s no stranger to aggressive, dominating, and possessive men. That’s why she’s always kept her distance. But the day Jax Knight walks through her door, she’s captivated by his charm. Stunningly handsome, well mannered, Ivy League educated, and confident, he shatters all the preconceived notions she’d come to think were true about men who trained to fight.